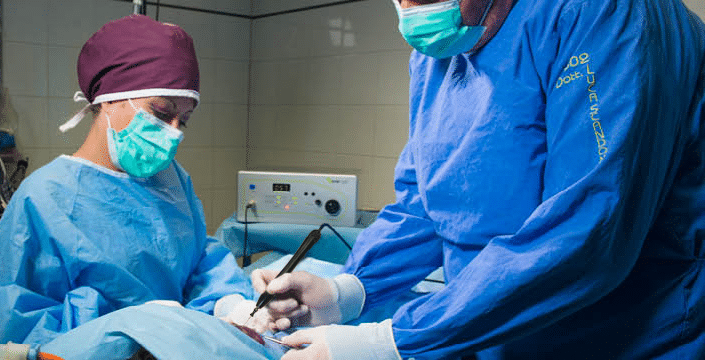 A selection of recommended veterinary uses for the Airplasma device Onemytis

With thanks to Julian Hoad, Clinical Director of Crossways Veterinary Group

We have been asked by Onemytis users to create a knowledge pool to help them understand the potential uses for this groundbreaking new device and to provide support for vets during the early stages of Onemytis adoption.

Julian Hoad of Crossways Veterinary Group was a very early adopter of Onemytis and has been using the Airplasma device for more than four years. He has kindly agreed to share his knowledge and experience for the benefit of the veterinary community.

Below is a list of the procedures routinely carried out by Julian and his colleagues, together with some top tips for their effective application.

Skin Incision
Julian’s primary use of the Onemytis is for skin incision. It is just as precise as a scalpel and the haemostatic effect of the Airplasma means there is little or no bleeding, resulting in a blood-free surgical field. It also reduces the risk of scarring, wound breakdown and bruising caused by subcutaneous hematoma formation.

Muscle Incision
Julian uses the Onemytis for muscle and fascial incisions. Sometimes, he says, there may be a bit of muscle ‘twitch’. His tip for addressing this is to adjust the power output of the Onemytis and also to use a local anesthetic. He points out that incisions made at the end of the muscle, the aponeurosis tissue, will eliminate any twitch.

Internal organs: gut, liver, bladder, uterus
The Onemytis can be used very successfully for surgery on internal organs, says Julian. In his experience it will produce normal rates of healing and no incidences of wound breakdown or problems with gut anastomosis. Organs he has used Onemytis for include:

Julian suggests that the Onemytis could potentially be used for pancreatic biopsies. The advantage would be that it might prevent the release of pancreatic enzymes, and thus reduce pain and improve wound healing. However, he has had no opportunity to try this yet.

Heart
The Onemytis works well for pericardiectomy – removal of part of the pericardium or membrane surrounding the heart to address pericardial effusion, when fluid builds up between the heart and the membrane.

Amputation
The Onemytis is routinely used for amputations including digits, tail and ear tips (pinnectomies). Julian finds these procedures can be carried out entirely by the Onemytis, without any need to use a scalpel.

Brachycephalic Obstructive Airway Syndrome (BOAS)
Julian describes the Onemytis as a ‘fantastic’ tool for widening the nostrils of dogs suffering from Brachycephalic Obstructive Airway Syndrome (BOAS). This procedure normally takes about 15 to 20 minutes with a scalpel, because of the need to isolate and tie off tiny blood vessels, while working in a very bloody surgical field. Instead, with the Onemytis&rsquo;s Airplasma technology instantly coagulating blood vessels, it takes just three to four minutes in total.

Removing small masses
The Onemytis can be used for the easy and rapid removal of small masses such as warts. Small masses, less than 2mm wide, do not normally need suturing as the Onemytis instantly seals the small vessels involved, resulting in little or no bleeding, and the skin granulates and heals quickly. Because there is little bleeding and the procedure is so quick, such procedures can be carried out with the animal mildly sedated or fully awake with a local anaesthetic.

The lack of bleeding and speed of the Onemytis also mean it is ideal for using for debridement procedures – removing diseased or infected tissue from skin wounds.

Nail bleeding
Julian has found another small but useful application for Onemytis is stopping nails from bleeding. Rather than cauterizing with strong chemicals, an unpleasant and painful procedure for the patient, Onemytis’s Airplasma technology instantly stops the bleeding, a much less traumatic procedure.

Removing ear polyps
Small polyps in the ear canal can be easily atomised using Onemytis, causing little or no bleeding. This is especially valuable as it is very difficult to control bleeding in the ear.

Oral surgery
Cheiloplasty or surgical lip restoration – the reshaping of lips to correct lip fold pyoderma and treat infections – can easily be performed using Onemytis. Once again the lack of bleeding provides a huge advantage over other techniques..

Inside the mouth the Onemytis can be used to perform both gingivectomy and gingivoplasty – the removal of diseased gum tissue or its reshaping for cosmetic reasons. Here, the Airplasma technology not only prevents the gums from bleeding but, due to the low temperature, there is little risk of damage to the adjacent soft tissue or teeth. It can also be used to remove epulides, or growths on the gum.

Joint surgery
Onemytis provides an effective way of removing loose flaps of cartilage in a joint and can also be used in remedial surgery for arthritic animals, to take away excess bone growth. It is better than a scalpel for cartilage removal as the Onemytis hand tool can more easily reach into the confined spaces involved than a scalpel.

Questions?
Julian Hoad has kindly agreed to answer any questions you may have. He can be emailed at julian_hoad@hotmail.com.

Find out further information about the Onemytis’s Airplasma technology can be found here.